Some quick updates regarding the interface

Hey, folks. You probably saw some unplanned downtime earlier today. I had to install a critical update that couldn’t wait until the next maintenance window.

A side-effect of this update is that it replaced the both the hamburger (three lines) and avatar menu interfaces. They… take some getting used to and I can force it back to the original menus but I am leaving them in the current form because Discourse will eventually force them to be enabled.

Now, that said, I have a question for all of you.

On the desktop version, the hamburger menu has two potential layouts, I chose the version that behaves like the old form, but as an alternative in the normal computer browsers it can be set to be an always on sidebar.

Would you be interested in trying the sidebar? It uses the same interface the drop-down menu does, it’s just a sidebar instead.

On the mobile site, it uses the drop-down menu form always. Just let me know what your thoughts are.

I meant to post this screenshot that shows what it looks like (note this is a demo site for a project I’m doing for work, but it gives an idea what the sidebar looks like): 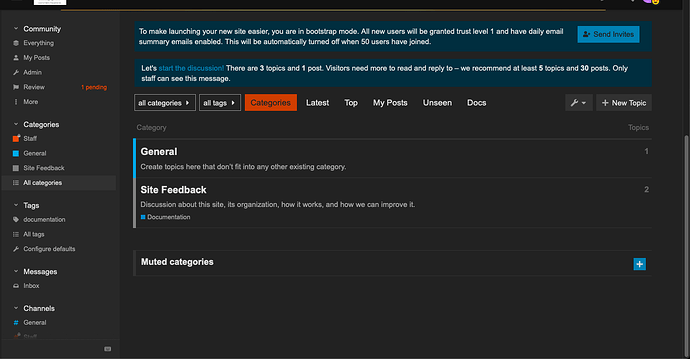 The sidebar looks like it would ease up navigating a bit.

I love it let’s do it

Well since the only two people who even bothered to reply have both voted for it, I’ll enable it after I finish adjusting some of the default settings

Sidebar enabled. Note that it does try to promote the chat more visibly. Also, if you go here you can customize the tags and categories that show up in the sidebar. I just put the ones that people would probably consider the most useful there.

Okay, I technically lied. I totally abused the fact that I’m the admin so I listed my blog category on the sidebar. You may feel free to remove it though. I promise I won’t bite. I’m not a vampire or werewolf the last time I checked

Oh that is so much better, thanks